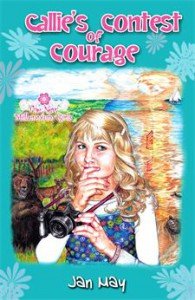 SOMETIMES a reader loves a book so much, she begins on page one again after finishing. So when my 11-year-old daughter read Jan May’s first middle grade novel not once, but three or four times, I was on the lookout for a sequel!

Thankfully, the newest Millennium Girls novel came out around Lydia’s birthday. I quickly bought it.

Callie’s Contest of Courage, self-published by the author (2014), follows the struggles and doubts of 11-year-old Callie Fleming, an ardent animal lover and budding photographer, whose dad is unexpectedly deployed overseas. When Callie’s dad goes missing, she prays that God will bring him safely home.

While waiting, Callie discovers a biography of Gen. George Washington and reads an inspiring passage about his service during the French and Indian war. s horse was shot out from under him. Thirteen rounds later, the Native American chief opposing him in battle, ordered his warriors to stop firing.

“This man is under the protection of the Great Spirit,” May recounts the chief’s words.

Gen. Washington credited God for saving his life. “By all-powerful Providence I have been protected beyond all human probability,” he wrote, “for I had four bullets through my coat, and two horses shot out from under me yet I escaped unhurt, although death was leveling my companions on every side.”

God doesn’t always answer our prayers the way we’d like. And war is never easy to understand. Current global hardships – from the Syrian refugee crisis to the Middle East – are devastating and difficult.

It’s not easy to know how to respond or what to tell a child whose parent is away fighting. But just in time for Memorial Day, May’s book offers encouragement for young readers.

And, if they resemble my daughter, they’re likely to read it again.

For this and and other books by this inspirational children’s writer: http://www.newmillenniumgirlbooks.com