Of the above three, flying with my daughter Ruth, who was two, from Maine to Uganda felt like the longest. But those thirty hours don’t compare to my longest journey: seven years.

That’s the time I’ve spent from when I began writing the unlikely story of Ruth’s adoption to sending the most recently revised draft to my agent last week.  Finding my voice, putting down the words, and–most of all–figuring out what they meant has been equally exhilarating and excruciating.

Then, just as I was approaching the peak of Mount Publishing, I found another mountain to climb… Mount Platform. Think Facebook, Twitter, blogging, and any other way to get recognized–other than lighting myself on fire on YouTube.

An incredible friend developed this web site. I’ve (nearly) figured out Twitter, and my husband signed me up for Facebook. Only my page “likes” hovered at a dismal 300. My agent encouraged me to increase my numbers. But how?

On Wednesday, I bought my first Facebook ad. Then I figured, If I am going to buy ‘likes,’ I’d rather pay someone who needs it. So I posted, “For every new like over the next five days, I’ll donate $1 to Welcome Home orphanage in Uganda (up to $100).” Then $500 popped into my head.

Knowing the money was for a great cause, I upped my offer. Then I sat back to see what happened.

Day two? One-hundred or so.

Day three? More than two-hundred. I was shocked!

I didn’t have time to check my page again until later that evening. Five-hundred new likes!!! I was thrilled.

When we adopted Ruth, friends donated money. Businesses gave raffle items. A local ice-cream maker trucked over ice-cream sandwiches to hawk. Over six months, we raised $15,000. And it was exhausting.

But supporting a cause can be as easy as clicking a button. That’s the power of “like.” While it costs you nothing, it does a great deal of good for others–whether you’re helping a budding author get published or you hope they’ll write a check.

Will we miss the money? Yah. But, not as much as those kids in Uganda. For my family, writing a $500 check means fewer fancy meals and sticking closer to home. For them, it’s the difference between having a meal or a home.

So, the check is in the mailbox. It feels odd announcing such a gift. Don’t let your left hand know what  your right is doing, right? But we have already been given so much, this check really isn’t from us. It’s our way of saying “thanks” and to keep the gifts we’ve received going to others. 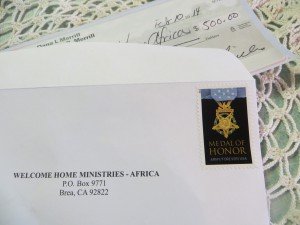 “Freely you have received, freely give,” Matthew 10:8.

Your turn!!! So, what’s the longest trip you’ve taken? What struggles did you face? And what encouraged you to keep going?

To stay more connected, please subscribe to this weekly blog!