A CONTEST OF HEART 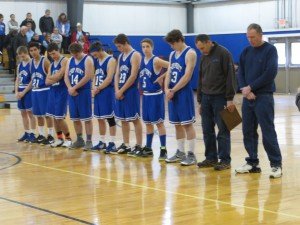 A huge sports fan I have never been. You won’t find me hunkered under a blanket cold winter nights, eyes glued to the big screen watching basketball. But I’m a huge fan of my kids.

So there I was Saturday, driving my two high school sons and our exchange student through the snowy woods of Woolwich to compete in their league’s championship basketball game–my daughter and two youngest sons buckled in between them.  The air was bright with February sunshine, the car clunking over frozen mud tracks as we slid down the icy road toward the gym. And no one was talking.

That’s how tense the guys were–knowing how hard they’d fought to get there, knowing what a hard fight was ahead. When my oldest son, Judah, joined the team two years ago as a freshmen, they lost nearly every game. They were a new team, a small school, with volunteer coaches, coming out night after night after putting in a full day at the office to nudge and shape and encourage these boys into a group with skills to win.

In just three years, the went from the bottom of the league to the top. So I understood a little of what these boys, rapidly on their way to being men, felt as they plugged in their earbuds and leaned back their heads, eyes closed, to focus on the hard work of winning. Gabriel, a freshmen, sat in the front passenger seat beside me. I reached out to rub the back of his neck and stretched my arm around his shoulder, knowing he loves basketball more than just about anything.

“Give it to God,” I said. “Then use everything He’s given to you to play the game.” 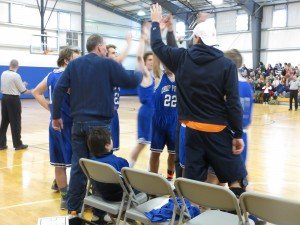 He let out his breath slow, eyes ahead, tension eased. An hour later, my husband met us at the school gym. The two of us stood on the sidelines, proud as any parents could be, as Judah sunk the first basket of the game, popping it up under the hoop. I cheered as the roar of the crowd filled the gym. And those boys played hard, including our exchange student–a champion skier from Spain who’d never played basketball before this season.

By halftime, our boys were ahead, 17 to 13. Gabriel scored some eye-popping three-pointers, and Jose was tough on defense, his hands frequently stealing the ball. But with just eight players to the opposing team’s sixteen, our guys began to tire toward the end of the third quarter and fell behind. It was a close match. Both teams played well. The crowd screamed so loudly the vibrations rattled the roof, causing snow to slide off in great sheets that pounded the ground as heavily as their feet pounded up and down that long wooden court. But in the end, the other team won. 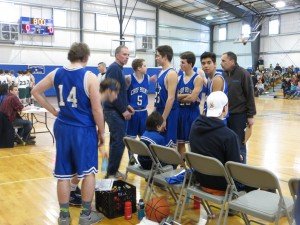 My heart ached, knowing how hard those boys had worked and much they wanted that trophy held high by their opponents. But the real trophy came after.

Walking up the snowy lane toward our van, I heard a boy, a senior, from our team talking to his mom and dad.

“I’m sorry we lost,” he said. “It would have been really great to win. But you know? We played our best, and everyone had a good attitude. I’m not angry. I’m proud.”

I was proud too. The real game isn’t won on a court, and the highest prize doesn’t sit on a shelf.

The real game is a contest of the heart.

In my mind, these boys won.

“Whatever you do, work at it with all your heart, as working for the Lord,” Colossians 3:23.

Your turn. What contest have you been struggling to win lately? Attitude? Health? Finances? And how has God helped you?